The Glienicker Brücke: divided we stand.

Was it optimism or irony that made them name the bridge the Brücke der Einheit (Bridge of Unity), I wondered?

At the start of the Cold War in 1949, mere months after the establishment of the Bundesrepublik Deutschland (BDR) and Deutsche Demokratische Republik (DDR), a newly-reconstructed bridge in West Berlin was officiated with that name.

At the halfway point of the bridge, they drew a white line. That became the border between the two states for 40 years. The Einheit only came to be at the Fall of the Wall in 1989.

As the Cold War proceeded, the bridge became more militarised.

The signboard for the renamed bridge was placed by the DDR to be read from the West.

The renaming of the bridge was by the DDR and it wasn’t so innocent, according to historian Beatrice de Graaf in her wonderful treatise on the bridge, ‘Die Glienicker Brücke als “Gedächtnisort” in der historischen Erinnerung‘ (‘The Glienicke Bridge as a “place of memory” in historical memory’) [OST-WEST. Europäische Perspektiven, 2012].

This is because the DDR placed the signboard with the bridge’s name facing west, specifically the sector then under American control.

(“Glienicke Bridge. They who named this bridge ‘The Bridge of Unity’ built the Wall, stretched out barbed wire, created the Death Strip and blocked unity.”) 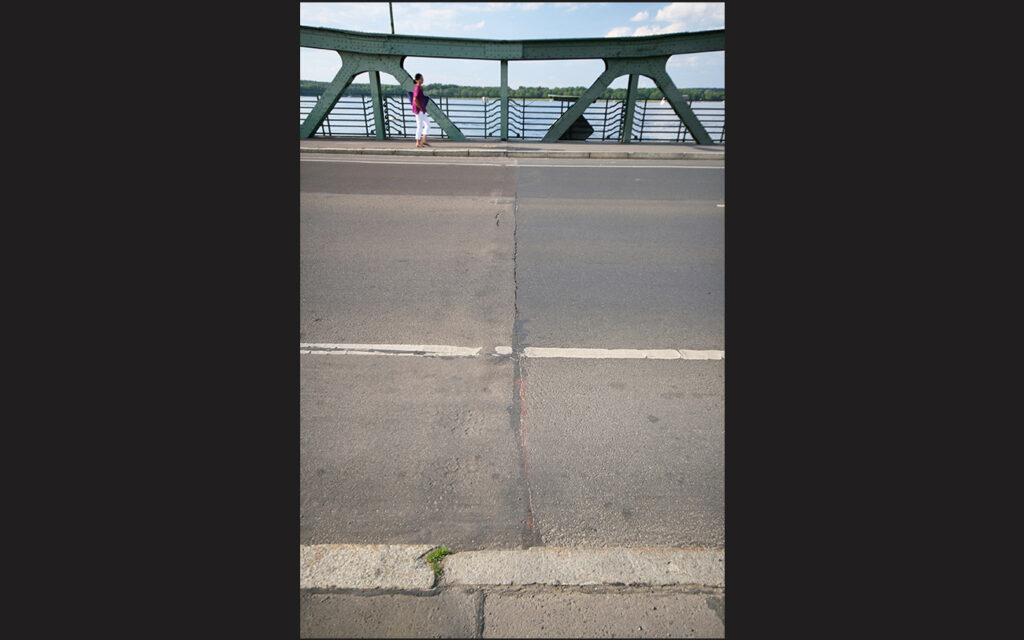 Even the shades of green it was painted were different.

The bridge was a secure location to trade spies and other detainees, according to Wikipedia.

The Glienicker Brücke was never an official border crossing. Instead, it became a special crossing for diplomats and representatives from both blocs.

Unlike the more famous Checkpoint Charlie border crossing, there was little in terms of provocative actions or attempted escapes by East Germans.

But the bridge caught the public imagination – and continues to do so – when it became the site of exchange of political prisoners. Today, it is still known by its media-dubbed moniker of Agentenbrücke, literally the ‘Bridge of Agents’, although in English, it is known as the ‘Bridge of Spies’.

Though exchanges were carried out only three times, this reputation has been cemented in political novels, films and pop songs.

Filmmakers and novelists invariably depicted the bridge as mysterious and cold to enhance the danger and thrill of their espionage story-telling. 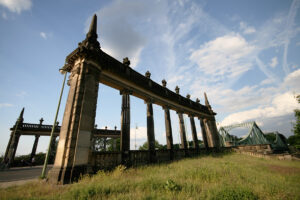 Schinkel designed a low-lying picturesque stone bridge (later completely destroyed) that was in harmony with its surroundings.

So it is undeniable that the bridge is today a historical monument of the Cold War. However, it is also celebrated for its earlier history – that of its beginnings, to be precise.

According to de Graaf, 17th-century Prussian royalty first built this bridge to access hunting grounds and named it after a village in the locale.

Two centuries later, master architect Schinkel was commissioned to replace the wooden bridge with a stone one. He designed it so that it would blend in with and offer views of the surrounding lakes and rivers as well churches and palaces.

According to de Graaf, explorer-naturalist Alexander van Humboldt declared the whole on par with the most beautiful parts of the world.

The bridge provides vistas of the landscaped surroundings and vice-versa.

The metal bridge is now beloved by visitors, sometimes literally, as these love-locks indicate.

Due to increased road and river traffic, Schinkel’s bridge had to be replaced in 1907 with a higher, wider, modern cast-iron version.

There was opposition to this but the project went ahead. It was this version of the bridge that was badly damaged at the end of World War II and reconstructed thereafter.

Today, the bridge links the modern-day city-state of Berlin and the state of Brandenburg and is part of the Unesco World Heritage Site of the Prussian-era palaces and parks of Potsdam and Berlin.

Signboards and markings on and around the bridge remind visitors of the Cold War years. However, my reckoning is that for non-Cold War history buffs, the bridge has been relegated to a curiosity within the immense and older cultural landscape. ω

More of the bridge’s history is on the German Wikipedia and the Unesco World Heritage Site descriptions of the Berlin Senate Department for Urban Development and the Environment homepage.

Experienced: 12.10.2011 || Recounted: 02.12.2015 Click here for bigger map
Do you have something to say about the story? Please comment on Facebook or send me an email.
Share This
Read more about:
Cold War | Potsdam | Prussian | Unesco World Heritage Site