The Berlin Wall cut through public and private spaces.

It ran ruthlessly through everything – homes, churches, city squares and even burial grounds. One of these was among Berlin’s oldest cemeteries, the Invalidenfriedhof (Invalid’s Cemetery). Built in the 18th-century, it was where Prussia’s military greats were interred.

When the Berlin Wall cut through it in 1961, a third of the cemetery was destroyed. In its place was the so-called Death Strip, a militarised zone which ran between a built inner wall and the adjoining canal which served as the outer barrier.

Brutal as that may seem, the Invalidenfriedhof had actually already undergone several transformations by the time the Deutsche Demokratische Republik (DDR) got to it – including the erasure of earlier graves and histories.

But it was the Berlin Wall remnants that made me pause when I first walked along the canal past the Invalidenfriedhof. Those, and stumps of what I assumed were old graves and gravestones on either side of the path I was on.

Wait, there were graves on either side of the inner Berlin Wall?

The Spandauer Schifffahrtskanal (Spandau Shipping Canal) served as the outer perimeter of the Wall.

My interest piqued, I read up on the cemetery before heading over to explore it, and discovered it was yet another site with layers of history. The most eye-opening piece of information was that the destruction of tombs by the DDR was by no means new although it was arguably the most devastating.

According to the Förderverein Invalidenfriedhof (Friends of the Invalidenfriedhof) and German Wikipedia, the cemetery was originally part of a home and hospital for disabled army officers. It came to be the place of internment for distinguished high-ranking and decorated men and women in the military, public service and medicine.

The cemetery had 6,000 graves when the concern was demilitarised in 1918. But six years later, half the graves were leveled over. This is thanks to a pragmatic German solution for the lack of space for burials – the re-using of graves.

Grave sites are leased for 20–30 years and when the leases run out, they are re-used. Family and friends may, however, pay for leases to be extended, and that is how a number of historically-important graves from the earlier period survived. However, others were wiped out in that 1925 action.

Rauch’s slumbering lion on the Scharnhorst tomb was carved out of a captured canon.

The tomb is a fine example of 19th century neo-classical sepulchral architecture.

At the cemetery, I located a tomb that survived 1925 and went on to play a key role in the challenges the Invalidenfriedhof would face in the coming decades. This was the Scharnhorst family tomb, which I picked out from among the monuments thanks to its elevated bronze lion.

Completed in 1834, the sepulcher honours a celebrated Prussian military strategist and reformer who died of a battle wound during the Napoleanic Wars. The monumental tomb, complete with sarcophagus, reliefs, goddesses on columns and railings, was the work of four architectural and artistic greats, including Schinkel.

When the Nazi period came around, confusingly, both Nazi figures and resistance-fighters were buried at the Invalidenfriedhof. Post WWII, all Nazi markers were removed by the Allies. War dead were also buried in mass graves there.

WWII dead are commemorated on the old cemetery wall that was partially reconstructed in 2002.

Tombs of Prussian commanders such as Hans von Beseler made way for the Death Strip; his was rebuilt in 2009.

When the Cold War began, the cemetery came under the DDR. In 1951, the authorities decided on another leveling-over of graves whose leases had lapsed, as well as ones that were war-damaged. There was some initial attempt to identify and preserve historically-significant tombs but this was not properly implemented.

A decade later and again, a decade after that, iterations of the Wall and Death Strip were built through the canal-bordering section of the Invalidenfriedhof. Throughout the Cold War, some graves were quietly relocated but tombs continued to be destroyed or parts thereof stolen. Even vegetation was not spared.

By the time the Cold War ended, 230 tombs and gravestones remained of the 3,000 that were there before the Wall was built. That the cemetery was not completely flattened was actually thanks to the tombs of Scharnhorst and his soldierly contemporaries.

Heroes of the Napoleonic Wars such as Scharnhorst were appropriated by the DDR as freedom fighters. Preserving their burial sites were important to the state. In addition though, East German conservationists fought to save what was left of the cemetery. 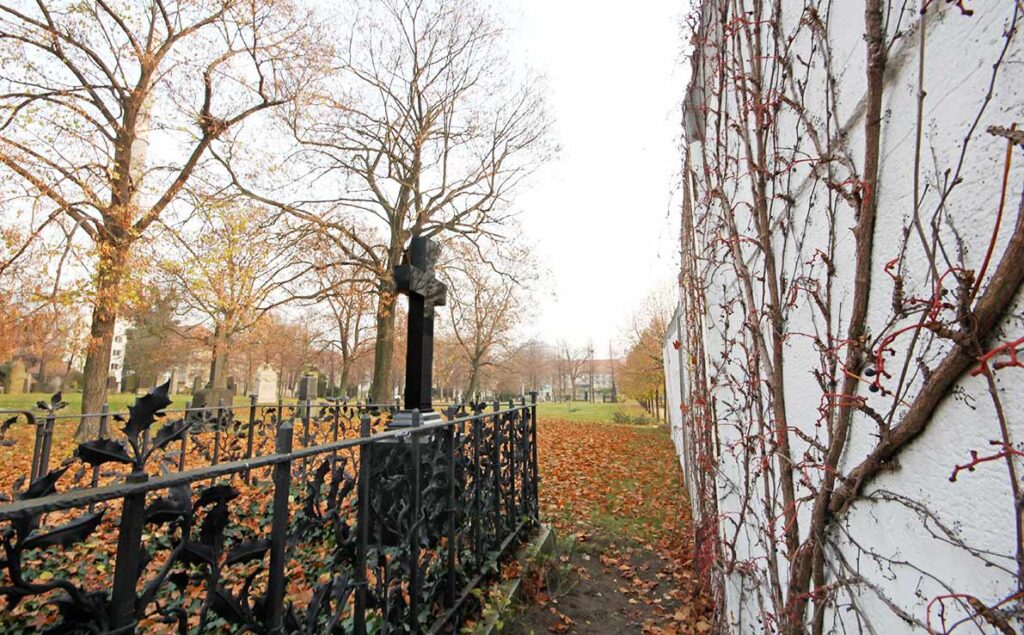 Right by the inner Berlin Wall was the tomb of Prussian theatre-director Georg von Hülsen-Haessler, which was destroyed in 1974.

Its intricate fence was discovered in a beer garden after the fall of the Wall and the entire tomb restored in 1998.

Today, those remaining artefacts, together with excavated and restored tombs and gravestones, present a unique continuous history of sepulchral monuments and of Germany’s military and politics dating back to Prussian times.

In 1990, the Invalidenfriedhof was awarded memorial status as a Gartendenkmal, which conserves not only the remaining tombs but 180 metres of the border wall. The Scharnhorst tomb was among those that were restored and continue to be maintained by the state, which has also distinguished it with the title of Ehrengrab (‘grave of honour’).

Hopefully now, these souls will finally be allowed to rest in peace. ω

A detailed history of the cemetery is on the German Wikipedia entry.

The heritage value of the memorial park is on the website of the Berlin Senate Department for Urban Development and Environment.

This page explains the Fresian saying on the tomb, which is that of von Beseler.

[Story and pictures by SL Wong]
Experienced: 24.11.2011 || Recounted: 04.05.2016 Click here for bigger map
Do you have something to say about the story? Please comment on Facebook or send me an email.
Share This
Read more about:
Berlin Wall | cemeteries | Cold War | DDR (GDR) | Death Strip | memorials